Alvaiázere is a municipality in the district of Leiria in Portugal.
Alvaiazere is bordered by the municipalities of Ansião (to the north), Figueiró dos Vinhos (to the northeast and east), Ferreira do Zêzere (to the southeast), Ourém (to the southwest) and Pombal (to the west). The municipal holiday is on June 13.
It is about 170km from Lisbon and 178km from Porto and roughly equidistant from Tomar, Pombal, Ourem and Figueiró dos Vinhos.

Alvaiázere, village and county, owes its name to the Arabs. Indeed, when these people invaded the Iberian Peninsula in the year 711, they took over much of the current national territory. This was the case of Alvaiázere, who christened the Al-Bai-Zir or Alva-Varze, according to the different views expressed.


In 1200 Sancho I decided to repopulate and in 1338 it became a town by King John I.
In 1435, according to documents in the Torre do Tombo, D. Duarte donated the village to his wife, Queen Leonor, thus passing Alvaiázere to the crown area.


In 1514  Maçãs D. Maria, became a county, as well as Avelar, Aguda, Chão de Couce and Pousaflores. They were the "five villages" plus Arega.


The signs of the past are still very evident throughout the Alvaiázere county. There are a succession of stately farms and the religious spirit of the people is expressed in the legends that circulated from father to son for many centuries.


The economic base of this region is agriculture, as it always was. Fertile soils, the valleys and the well-watered plains and hillsides covered with vineyards and olive trees were important auxiliary of the population.

Administratively, the municipality is divided into 5 civil parishes (freguesias):
Together they occupy an area of 160 km2. The county is crossed by complementary route IC3 which links Coimbra to Tomar, and the A13 stretch that connects to the A23 (Entroncamento) and A1 (in Condeixa) and the city of Coimbra.  It is about 25km from Tomar and 60km from Coimbra and Leiria, which are considered centres of development in terms of business and education. 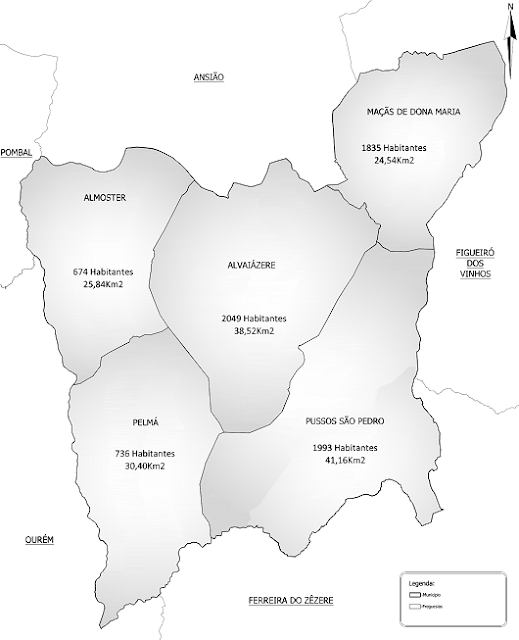